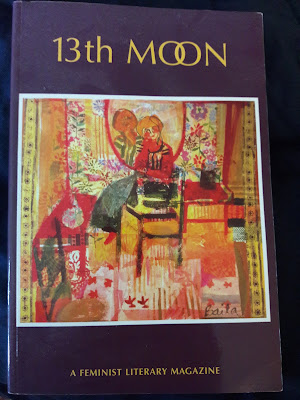 Fifteen years ago I wrote a monologue about the artist Baila Feldman, my mother, in a feminist literary magazine called 13th Moon, which has been published by the poet Judith Emlyn Johnson - a woman who was my mother-in-law.  The story was on the cover, with a beautiful painting by Baila that I actually don't remember from real life.  The issue it appeared it was this one:

The text is as follows:

Baila Feldman was born and grew up in Berwick in the Susquehanna River valley of northeast Pennsylvania.  After initially attending Goucher College, she transferred to Barnard College, graduating in the class of 1952.  In 1953 she married Robert Feldman, and in 1958 moved to San Francisco, where she gave birth to her daughter Rhea.  In 1962, Feldman moved to the Berkeley hills, where she gave birth in 1964 to her son Joshua.

While living the life typical of a suburban housewife with a small child, Feldman received her MFA in art from the University of California at Berkeley.  She was passionate about her art, throwing herself into it with deep convication; the awards and exhibitions soon followed.  Her early styles were abstract and intellectually rigorous.  Many of her mid-60s canvasses feature black line drawings of cultural icons juxtaposed on a stark white background. 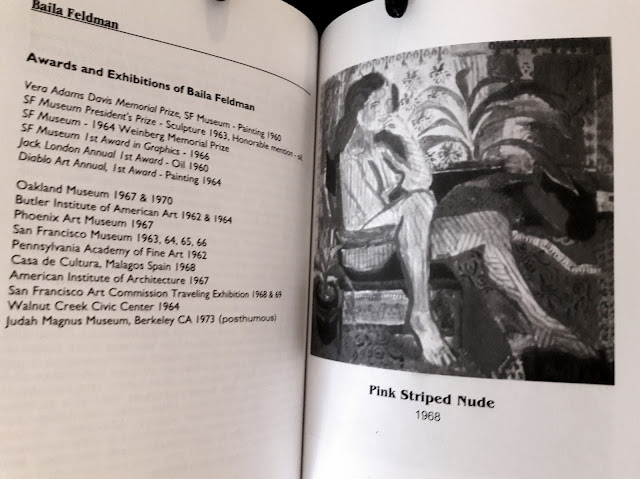 Soon, however, she began to experiment with color and representation, painting impressionistically over African wood block print collages.  Participating in the 1960s early feminist reconsiderations of subject matter, figuration, and multiple ethnicities, her work soon became characterized by broad sweeping lines, saturated colors, and images of animals, families, floral still lives, and nudes.  Finally, she abandoned the woodblock collage backgrounds in favor of icon-style gold leaf and painted fields, while discovering a playful lyrical line evocative outsider art and folk, primitive, and tribal styles.  This was the approach that characterized her late Judaic, family, San Francisco bay area, and Mexican city scenes.  Her many gallery shows and exhibitions received good press coverage, and her work was in demand in the late sixties, particularly the canvasses in folk and ethnic styles.  A number of these canvasses were reproduced as holiday cards. 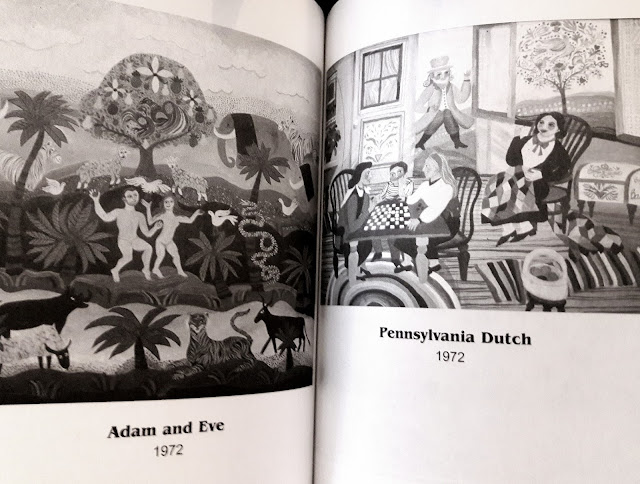 During the late 60s, like other women of the time, but in addition, probably as a breast cancer patient feeling pressure to pack in a great deal of experience and work into the short time remaining to her, Feldman participated in the counter-culture art and drug scenes.  Her house, a swinging commune, was filled with groupies, acid guides, alternate health practitioners, and a number of live-in students.  Always, however, art remained her first passion.  Especially during daylight, she could be found in the glass-walled studio floor of her house, which looked out over eucalyptus trees and a view of the San Francisco bay. 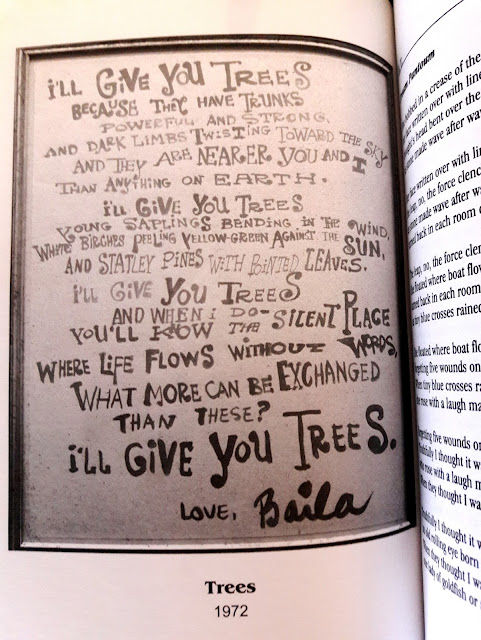 In the last years of her life, partially influenced by the increased 1960s emphasis on community and collaboration, and partly necessitated by her struggle against cancer, she began working with art students.  The students did canvas prep and technical work, like gold leap sky backgrounds, while learning from Feldman how compositional elements could function within these fields.  Typically, she worked on several canvasses at time, moving from one to another when she needed to freshen her eye.  She loved to look at the work of other artists, and took inspiration from other ethnicities and cultures:  Africa, ancient Egypt, Mexican, Judaic, American and Pennsylvania Dutch folk art.  She continued painting until August 20th 1972, when she died of breast cancer.

Posted by NewYorkJosh at 3:23 PM 2 comments:

In Baila Feldman's last couple of years she produced a nice cut sheet explaining herself as an artist, plus listing her awards and exhibitions.  These were attached to the back of each painting she sold.  The last year listed for any exhibition is 1970 - so I believe the cut sheet was produced in that year or shortly afterwards.  Her last exhibition was the posthumous one in Winter of 1973 at the Judah Magnes museum.   Here's what the cut sheet looked like: 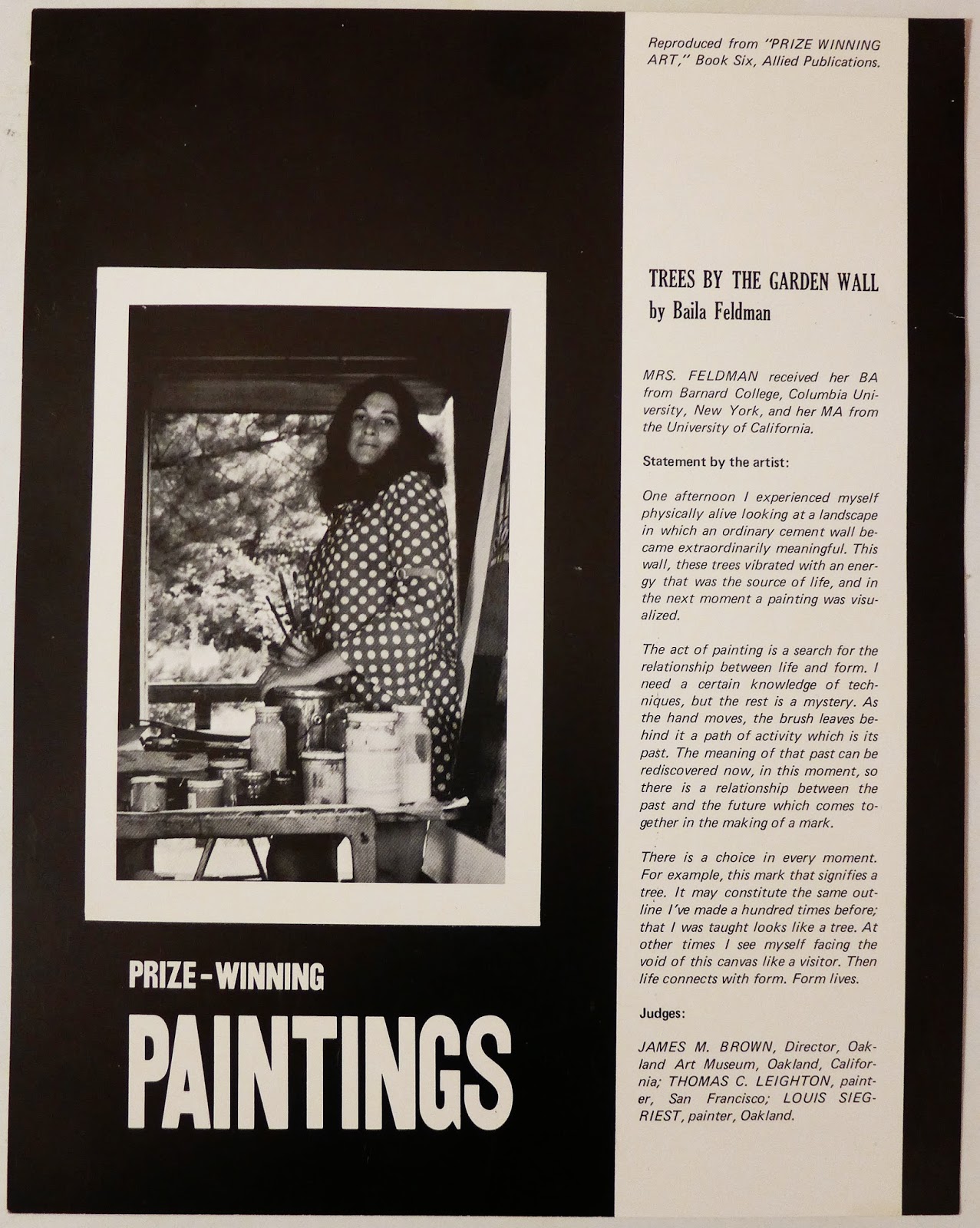 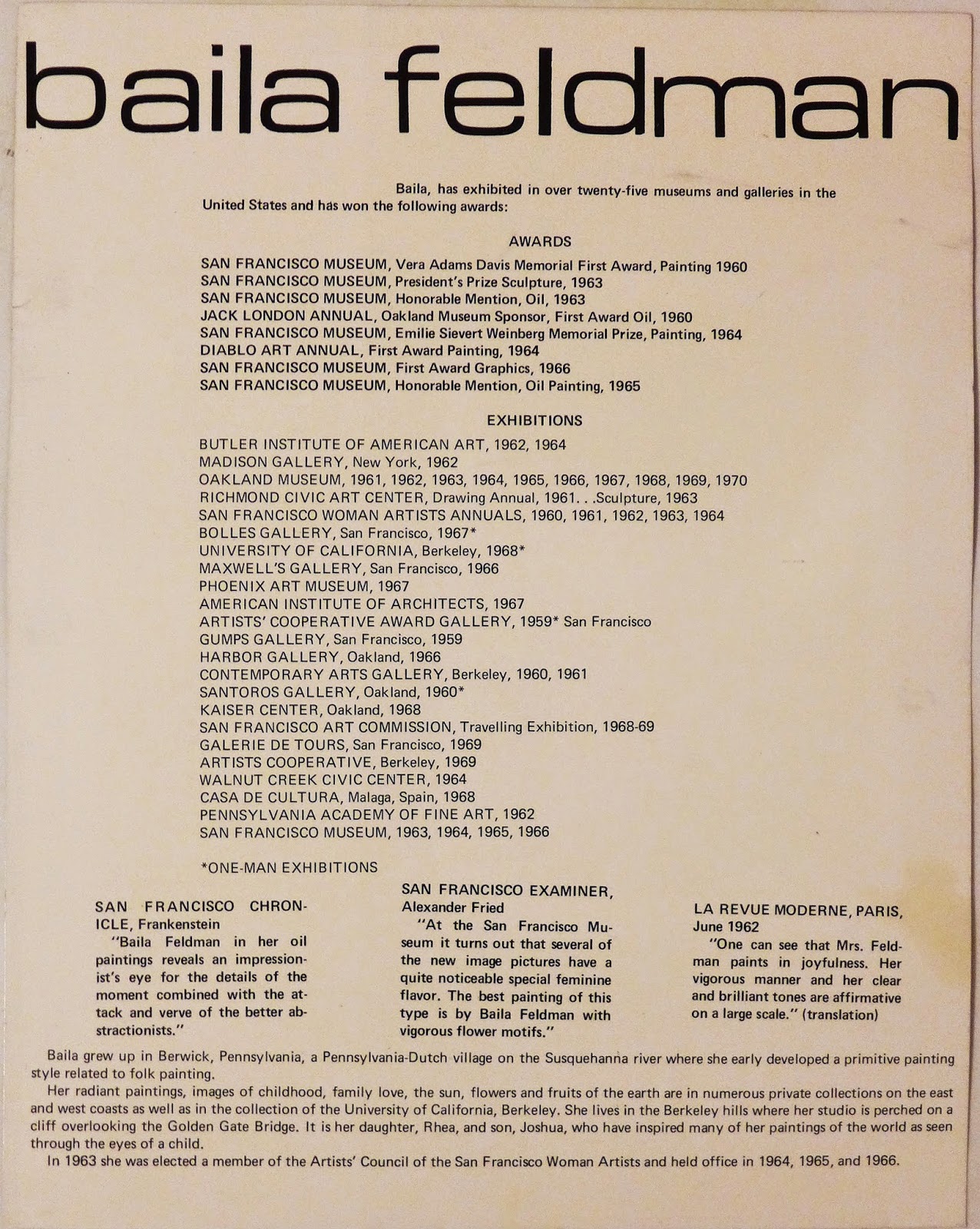 Posted by NewYorkJosh at 5:54 AM No comments:

Email ThisBlogThis!Share to TwitterShare to FacebookShare to Pinterest
Labels: Biography 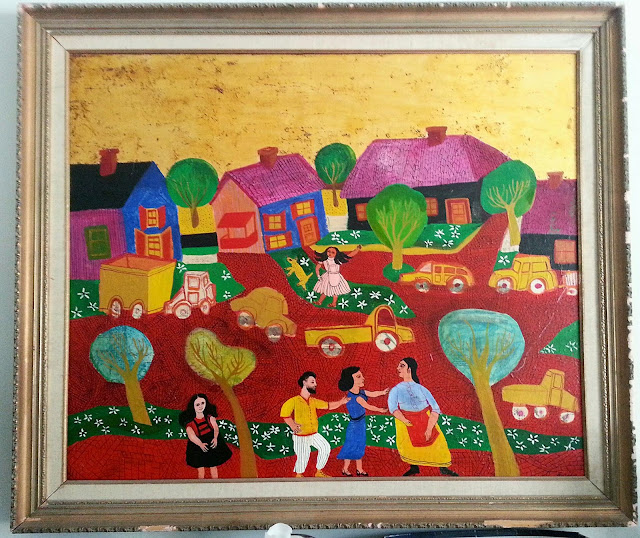 Baila Feldman loved to paint images of everyday life.  There are canvasses of people playing cards, walking in the park, sitting in chairs, going to market, and - as seen here - simply walking on the street.  In these three late style naive primitivism examples (late 1960s-early 1970s), perspective is as a child would render it.  The cars are childish as well.  People are simple and joyous and the colors are radiant; jewel-like; over the top.  The buildings, hills, trees, and landscapes themselves seem to breathe and move.  In the example above, the red street is laced with a multitude of tiny lines indicating brickwork.  The bricks are all over the place: the grids obey no order whatsoever.  People and animals are in the foreground.

In the scene of Los Angeles titled "Wilshire Boulevard" - courtesy of Jennifer Eastman Hansen, of Palos Heights, Illinois) - there is almost formal perspective.  But not quite.  The emphasis on joyous people is a constant.

Posted by NewYorkJosh at 3:09 PM No comments:

Moses in the Bullrushes 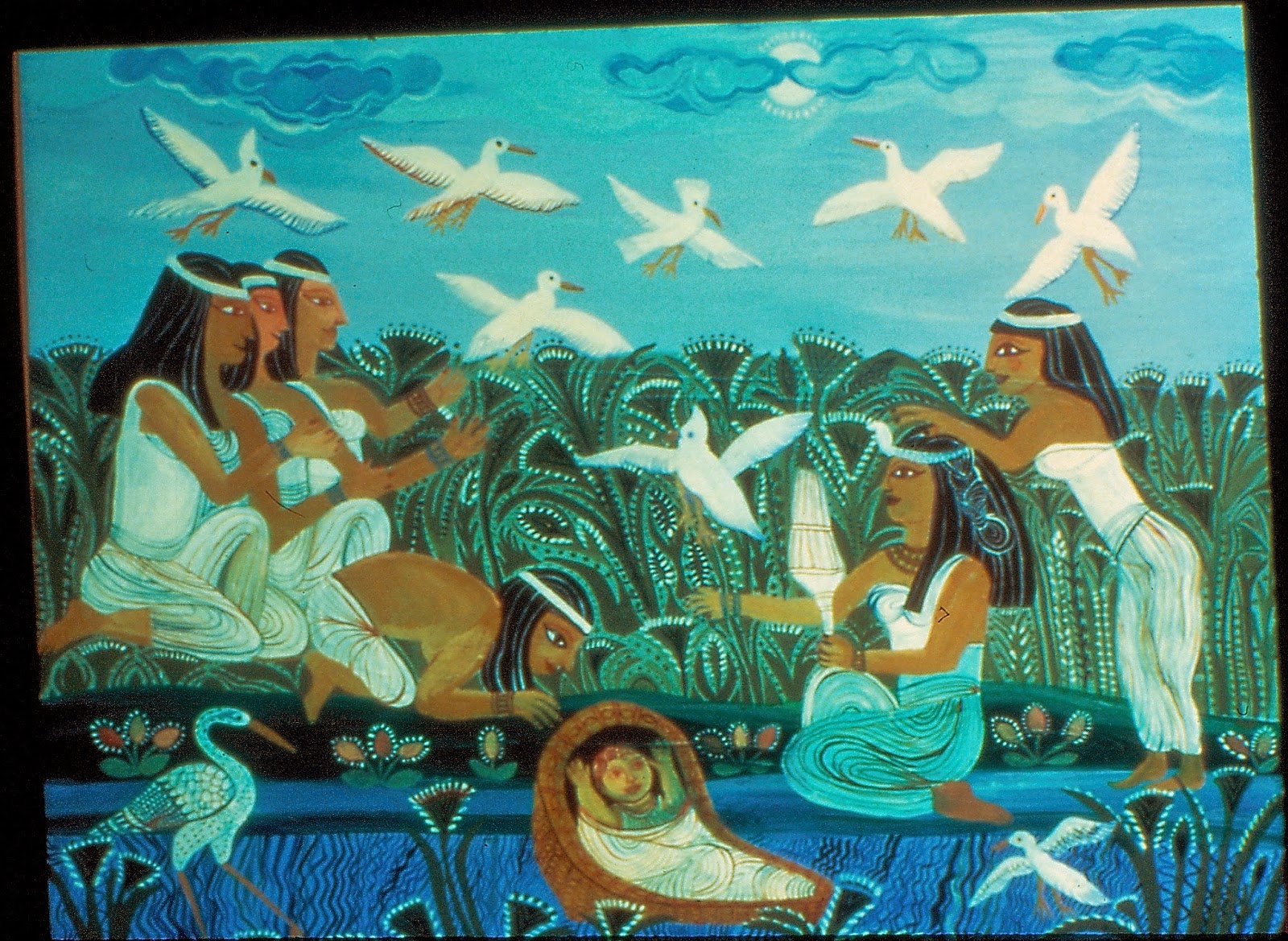 In Baila Feldman's later paintings she sometimes employed stylistic elements from other cultures.  In this painting "Moses in the Bullrushes" she experiments with ancient Egyptian motifs in a treatment of a story from the Old Testament Bible.  Baila's classic exhuberance is on display in the infant Moses' lifted arms and the riotous payri.
Posted by NewYorkJosh at 2:00 PM No comments:

Feeding The Birds" 1960 - a Baila Feldman painting for sale. 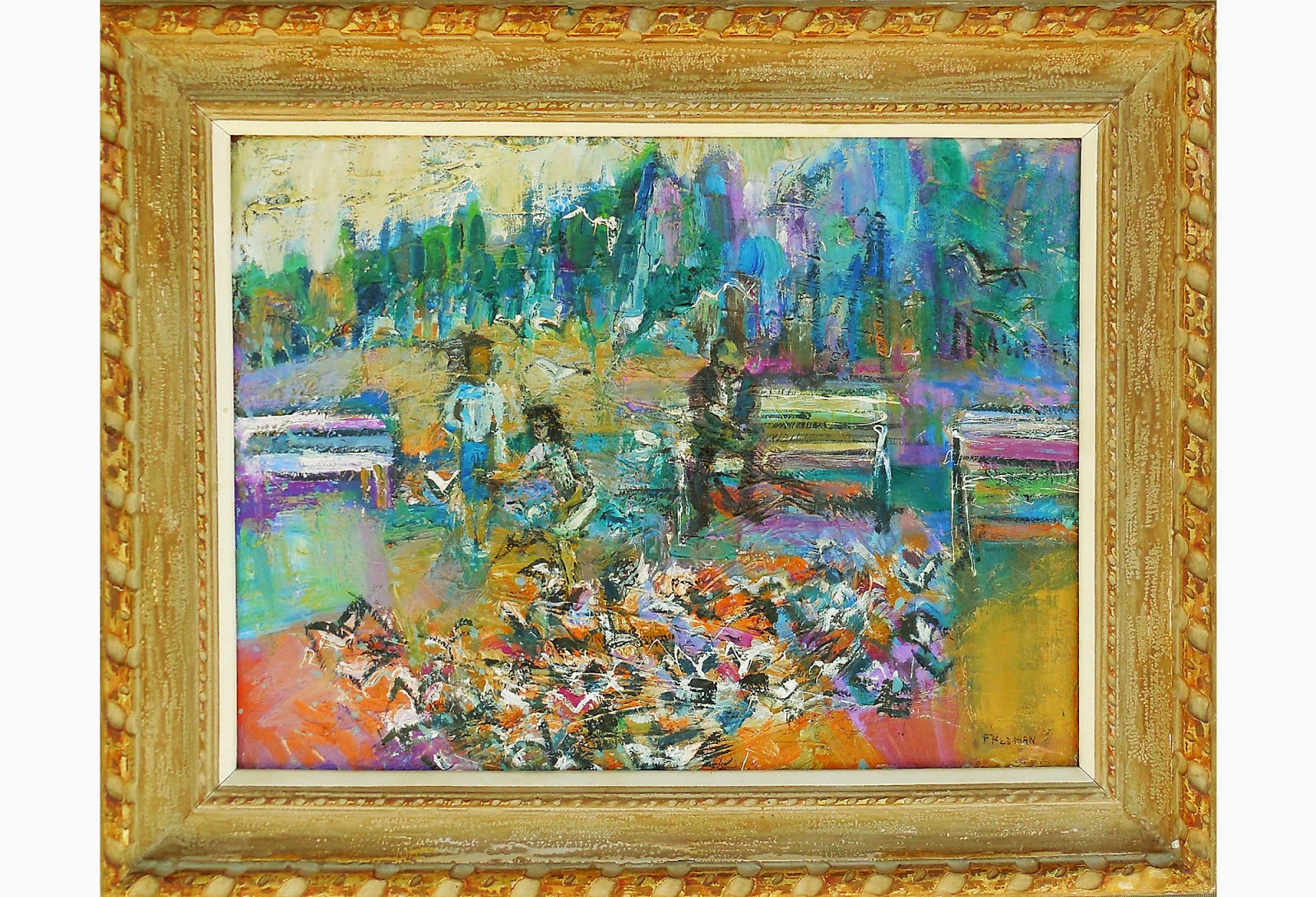 The asking price?  $799.00  Let me know if you are aware of other sales records.  I might keep a listing on a page I make here for reference by other painting owners.

On the listing a couple of details from the back are presented:

Posted by NewYorkJosh at 2:09 PM No comments: 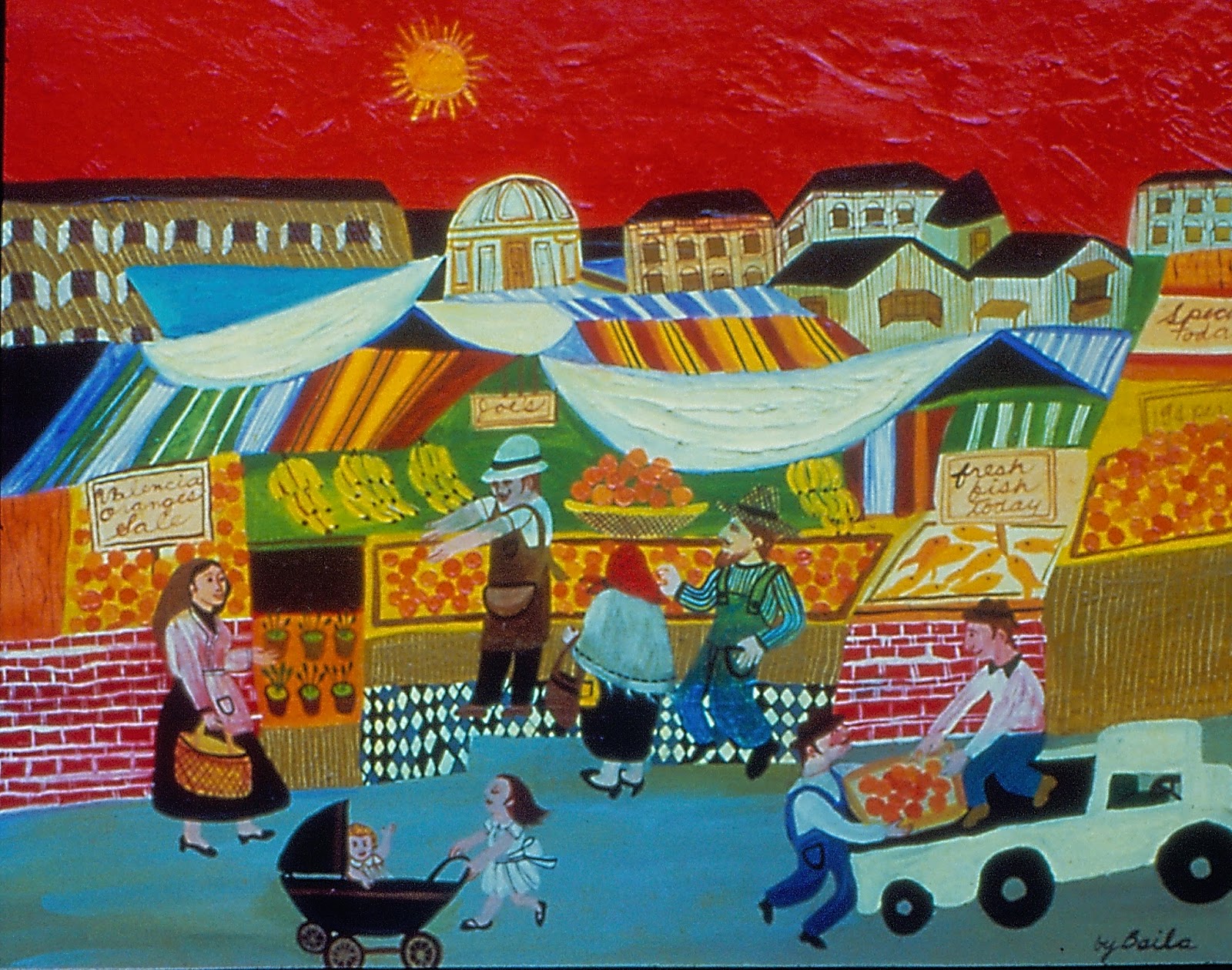 Baila Feldman frequently painted scenes from everyday life: people playing in the park; lovers, children, holiday celebrations, etc...  Some of her happiest works were market scenes.  The two examples shown here are in very different contexts.  Below is a Mexican market, with a gold leaf sky and a rural, tree filled location with cloth tents. Above is an urban scene that looks European with classic buildings in the background and a brilliant red sky.  But the feeling of joy and brilliant color is constant in both. 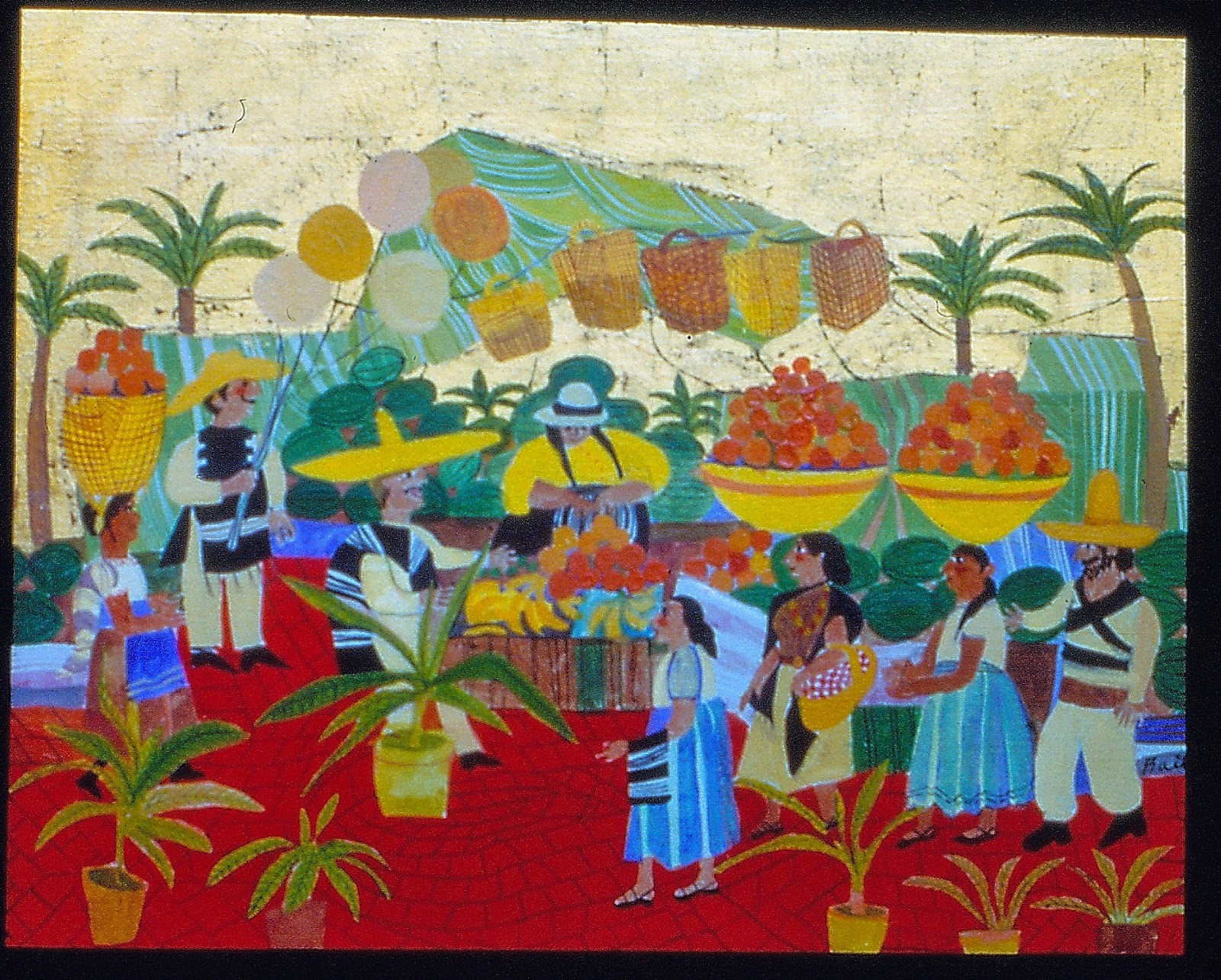 Posted by NewYorkJosh at 2:04 PM No comments: 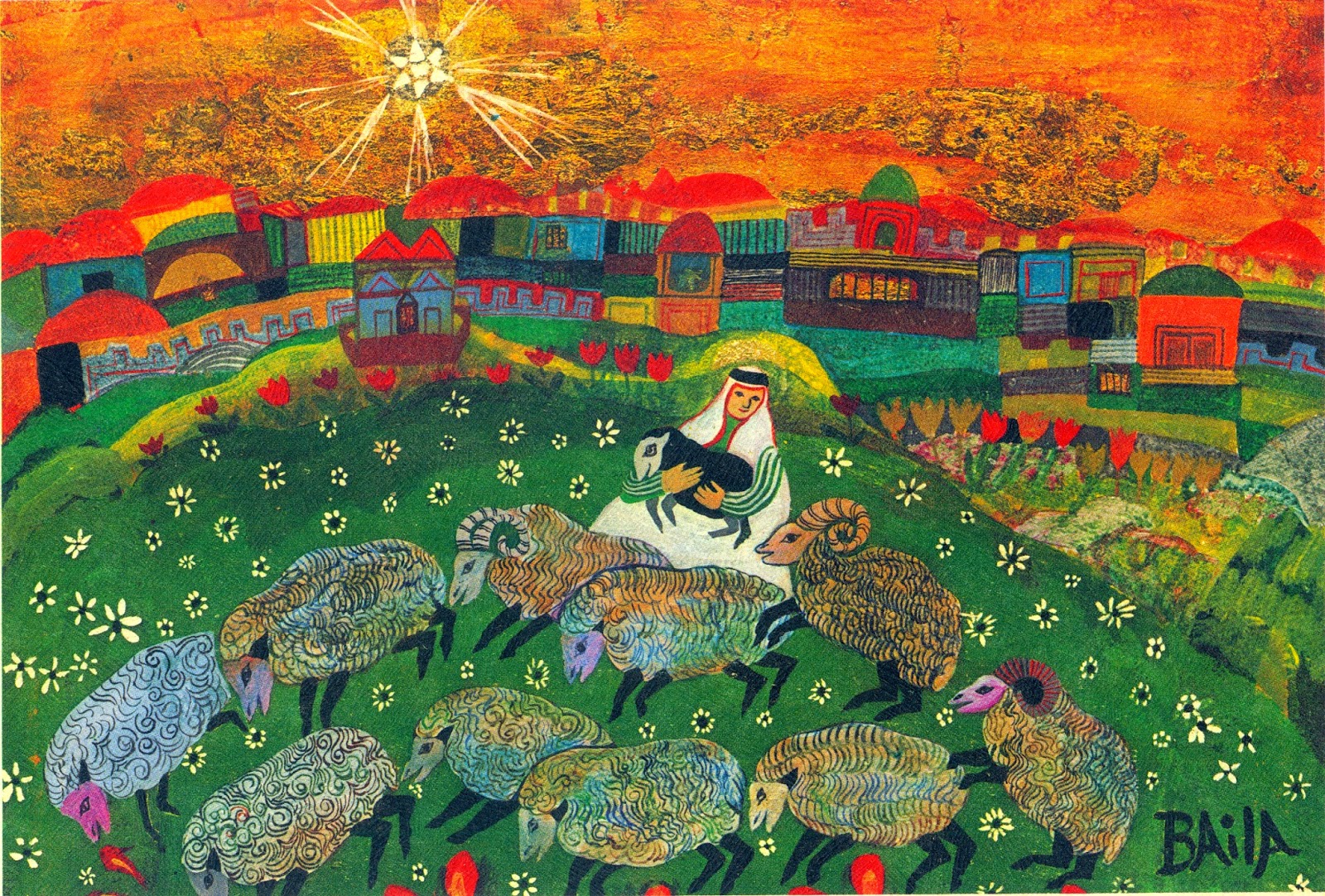 Baila Feldman's later naive style included a number of paintings with themes from the Bible.  But one of the themes she returned to frequently was the shepherd.  I know of at least four paintings of this theme - and they all represent shepherds from the Old Testament.  In the two examples shown here we see the same peaceful energy and subject: the middle-eastern shepherd holding a small black sheep.  In each there is a major visual element behind the shepherd.  In the gold leaf sky version, above, it's Biblical Jericho (recognized from a canvas depicting Joshua at the gates of Jericho - in an upcoming post).  The sun shines in a six pointed star of David to underscore the Jewish Biblical context.  The scan above is taken from a proof for a Holiday card Baila had printed for sale at galleries and stationary shops.  I recognize the Holiday card format in the scale of her signature at lower right.  She made the name big for cards because she wanted it to be legible in the small format of a card.

In the blue shepherd scene, below, the major element is the sinuous and astonishingly beautiful tree.  The dynamic energy in the flowing tree's limbs is a contrast to the stolid blocky forms of the animals and shepherd.  The contrast gives the lower figures a greater sense of repose.  Notice the dove of peace, bringing what appears to be a twig to her chicks in a nest in the tree.  Conflating nest building with feeding fledglings might be an error - or it might be a symbolic statement.  I just don't know. 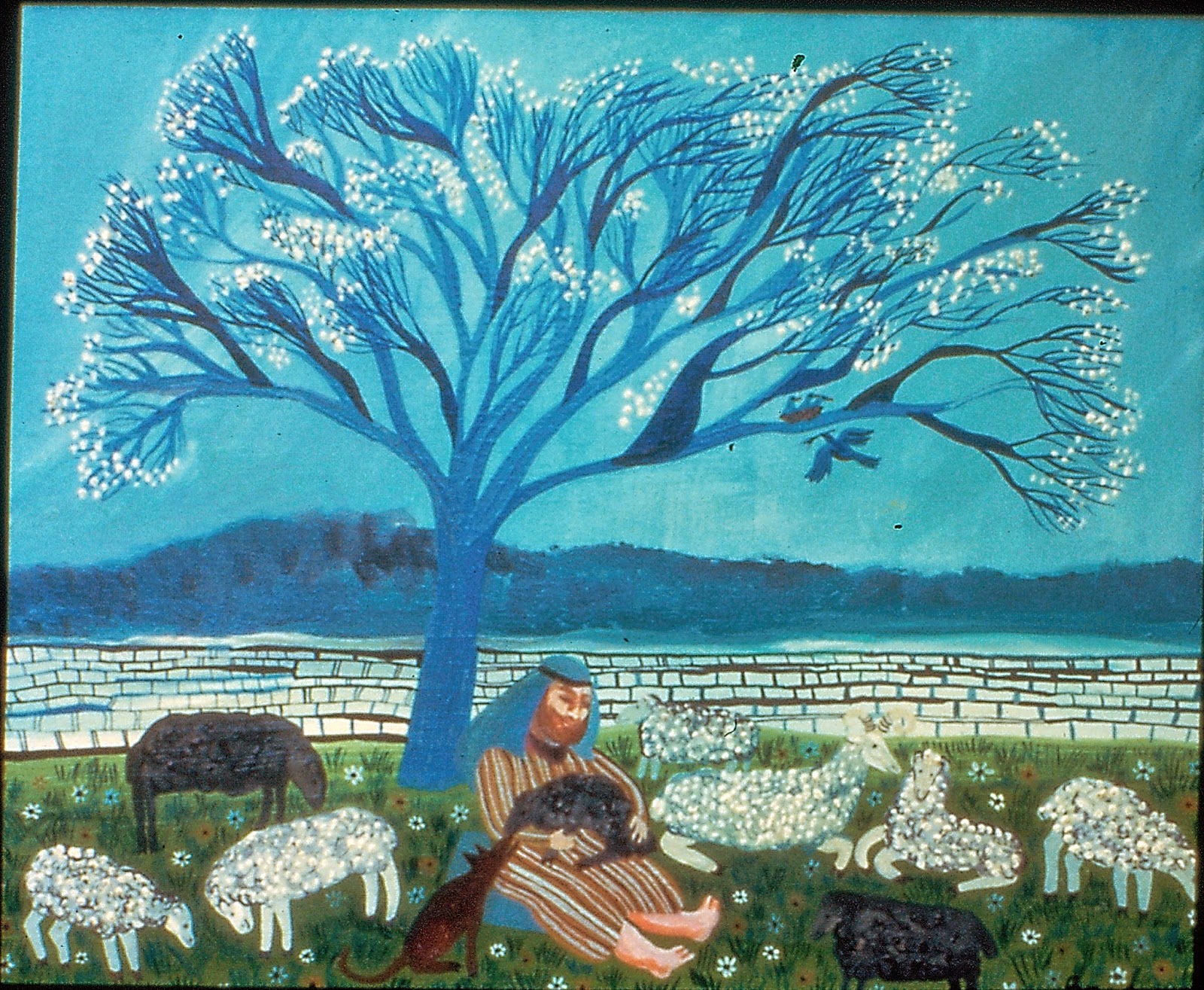 Posted by NewYorkJosh at 4:04 PM 3 comments: